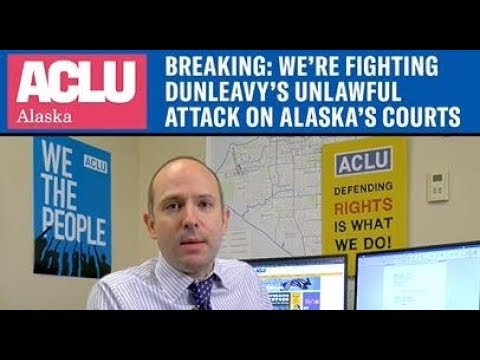 Today, the ACLU of Alaska filed suit against Governor Dunleavy to block his administration’s attempt to punish the Alaska Court System by vetoing $334,700 in its 2020 budget because the Alaska Supreme Court ruled in a manner at odds with his political views.

This veto is an impermissible exercise of executive authority that attacks Alaskans’ deep commitment to an independent judiciary, violates Alaska’s constitutional separation of powers, and illegally attempts to reallocate budget appropriations.

“Governor Dunleavy admitted outright that his veto was direct retaliation against the Alaska Court System for a court decision at odds with his political views. That isn’t just petty and vindictive; it is a clear assault on the constitutional power of the judiciary and a grossly inappropriate attempt to use money to coerce judges to a political end,” said ACLU of Alaska Executive Director Joshua A. Decker. He continued, “Alaskans don’t want judges making decisions with an eye on how much money politicians will give them if they rule one way or another. That isn’t how we get justice.”

The American Civil Liberties Union is our nation’s guardian of liberty. For nearly 100 years, ­the ACLU has been at the forefront of virtually every major battle for civil liberties and equal justice in this country. Principled and nonpartisan, the ACLU works in the courts, legislatures, and communities to preserve and expand the individual rights and liberties guaranteed to all people in this country by the Constitution and laws of the United States. The ACLU of Alaska, founded in 1971, is one of the 53 state ACLU affiliates that strive to make the Bill of Rights real for everyone and to uphold the promise of the Constitution—because freedom can’t protect itself.