(Oct. 27, 2021) - Body-worn camera footage provides an independent record of police behavior that, when made public, can reveal abuses of power, challenge police narratives, and can contribute to accountability. And while there are numerous examples that are a testament to the power of bodycams, we have also seen numerous examples of why simply acquiring and deploying body-worn cameras doesn’t always achieve this. Why? Because the policy must demand it. A strong policy will provide the department with a blueprint for using body cameras in a transparent way, and it will provide the public a way to hold police accountable.

The rules around how officers use body-worn cameras, and what happens to the footage, are vital to delivering accountability while protecting privacy. Without these, cameras can create greater harm and even be used as a police propaganda and surveillance tool, instead.

The Anchorage Police Department has been working on the policy for most of 2021, and publicly released two separate drafts while soliciting feedback from the public. Unfortunately, both the policy and public engagement have not shown a commitment to the central promise of body-worn cameras — that they can be tools for greater public oversight of law enforcement, especially when force is used, and engender greater trust between the police and the Anchorage community. It is imperative that APD improve its policy and public engagement before equipping officers with cameras, which will likely be in 2022. We offer several important ways APD can change its draft policy to achieve these goals. 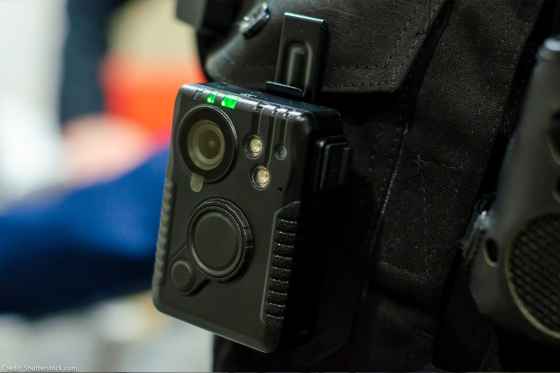 1. How Anchorage got bodycams

In April, nearly 54 percent of Anchorage Municipality voters approved a ballot measure to fund body-worn cameras and other technology for the Anchorage Police Department. While Anchorage had considered body-worn cameras for years, funding was a recurring barrier. However, after the murder of George Floyd in 2020, police transparency and accountability gained renewed focus — including a renewed push to find funding for body cameras, which community members and groups like the Alaska Black Caucus had long been advocating for. Instead of directly funding cameras through the municipal budget, the Assembly voted to put the question before voters.

2. APD’s policy must ensure the timely public release of body camera footage in showing police use of force or alleged police misconduct.

A.APD’s policy must ensure the timely public release of body camera footage in showing police use of force or alleged police misconduct.

Incidents in which officers use force or where misconduct is alleged are central to accountability and transparency. But the APD’s draft policy does not describe how it will release footage in these cases, and would make it impossible to see footage where an officer’s conduct may be criminal. If APD is allowed to withhold critical footage, and release only footage that shows officers in a favorable light, then body cameras will go from being a tool for transparency and accountability to a tool for police propaganda.

This type of footage makes up a small percentage of all body-worn camera footage. But it is critical for helping the public determine if the way APD officers go about their jobs is effective, appropriate, and in the public’s interest. And releasing body camera footage can be done in a way that ensures people’s due process and privacy rights, while increasing public trust. Specifically, APD should:

3. Create clear rules for when officers turn cameras on and off.

A.Create clear rules for when officers turn cameras on and off.

It’s in the best interest of the public and officers to create a simple, clear framework for when to operate cameras, so officers have fewer steps to think through and cannot be blamed for making the wrong call. Our approach, which is mirrored in policies across the country, is to require officers to activate the audio and video recording functions of their cameras when responding to a call for service, or at the outset of any other law enforcement or investigative encounter with a member of the public. To APD’s credit, the latest version of their draft policy includes new language along these lines - that “officers shall record all calls for service or when initiating an encounter with the public unless it is unsafe, impossible, or impractical to do so.” But the policy should be stronger and cleaner. APD should:

4. Prohibit officers from reviewing footage of videos showing any use of force before completing initial casework.

A.Prohibit officers from reviewing footage of videos showing any use of force before completing initial casework.

The initial reports, statements, and interviews that police routinely complete after an incident are the only chance for the public, police department, and legal system to learn about the officer’s first-hand experience of an incident. Reviewing footage prior to filling out reports runs the risk of changing the officer’s perception, undermining the legitimacy of investigations, and allows officers to align their statements and reports with video footage. In the worst cases, it enables outright lying. The APD’s draft policy does prohibit officers from reviewing or copying footage in some critical circumstances. But the policy should be made stronger by:

5. Ban the use of facial recognition technology.

A.Ban the use of facial recognition technology.

It is in the interests of both the public and the APD to establish clear rules for how it will retain video. Storing video properly and for an adequate amount of time is important for fulfilling the transparency and accountability goals of the body-worn camera program. When video captures a use of force or misconduct, we need to be sure the video has not been deleted or purged. It is also important to keep video for an adequate amount of time in other contexts — such as when it holds value in a legal proceeding. But it’s also important to set limits on how long video may be retained before it is deleted, because of the high cost of storing video and because of privacy. APD’s policy can strike this balance by:

7. Who makes the final decision on the body-worn camera policy?

A.Who makes the final decision on the body-worn camera policy?

The policy is ultimately subject to final approval by the Chief of Police, Ken McCoy. However, other entities – such as the Municipal Attorney’s office, the Bronson Administration, and the officers’ union have an influential role for the policy development.

Body cameras are coming to Anchorage