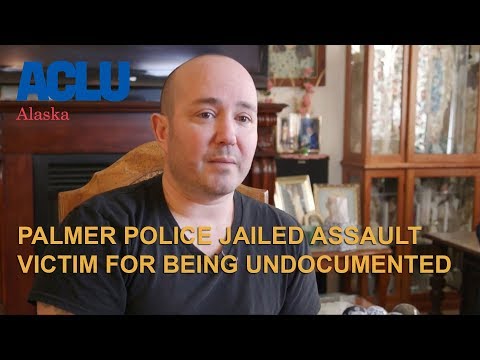 Anchorage, AK — The ACLU of Alaska today filed suit against the Palmer Police Department, three Palmer Police officers, and a Palmer Police dispatcher for unlawfully arresting a Palmer, Alaska resident at the request of Immigration and Customs Enforcement (ICE). Alaska peace officers have no authority under Alaska law to detain or arrest people for being undocumented, even if ICE requests it.

On August 27, 2017, after coming to the defense of a female bartender at Klondike Mike’s Saloon who was being attacked by patrons, Alex Caceda was brutally beaten by three men. When police showed up, they identified the attackers and handcuffed them, but upon learning Alex was an immigrant, the Palmer Police released the attackers without punishment and focused their investigation on him.

Alex was then arrested, taken to Mat-Su Pretrial Facility, and was kept in jail for four days. After being turned over to ICE, Alex was released without facing either bail or deportation hearings.

“It is unconscionable that the Palmer Police treated the victim of a violent assault this way,” said ACLU of Alaska Executive Director Joshua A. Decker. “Law enforcement leaders and their rank and file officers all over Alaska need to be put on notice that if they arrest anyone just for being undocumented, and particularly crime victims, they’ll be held accountable.”

Alex was never accused or charged with any crime and has no criminal history.

“Police can’t just arrest people on a whim,” said Alex’s attorney Matt Singer. “The U.S. Supreme Court has said, ‘it is not a crime for a removable alien to remain present in the United States’ and when ‘police stop someone based on nothing more than possible removability, the usual predicate for an arrest is absent.’ Further, Alaska law provides that all seizures and detentions by police, including investigatory stops, must be based on suspicion of a crime.”

“This kind of rogue behavior by police officers makes us all less safe,” continued Decker. “When police send the message to immigrant communities that if they call for help or report a crime they’ll be targeted for arrest, it damages law enforcement’s relationship with vulnerable populations and allows actual criminal activity to go unchecked.”

The American Civil Liberties Union is our nation’s guardian of liberty. For nearly 100 years, the ACLU has been at the forefront of virtually every major battle for civil liberties and equal justice in this country. Principled and nonpartisan, the ACLU works in the courts, legislatures, and communities to preserve and expand the individual rights and liberties guaranteed to all people in this country by the Constitution and laws of the United States. The ACLU of Alaska, founded in 1971, is one of the 53 state ACLU affiliates that strive to make the Bill of Rights real for everyone and to uphold the promise of the Constitution—because freedom can’t protect itself.

Video of the incident and explaining the lawsuit: https://youtu.be/l3FcgW78EHU